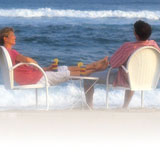 SECTION I: The Relationship from Hillary’s Point of View

Bill’s Sun in Your Third House
The intellectual connection between you and Bill is very strong. He stimulates your thinking and encourages you to communicate your ideas. And your ideas can be very helpful to Bill in achieving his goals. You enjoy talking with each other, and probably exchange frequent letters or phone calls when you are apart.

Bill’s Moon in Your Eleventh House

Bill has a sympathetic understanding of your intellectual and humanitarian interests, and is very supportive. You are good friends. He enjoys spending time with you together with others in your social sphere.

Bill’s Mercury in Your Second House

Bill can offer you good advice on how to handle your finances and personal assets. You should be careful not to represent his ideas as your own. You may provide him with financial support for the implementation of his plans.

Bill’s Venus in Your Fifth House

Bill’s affection and charm inspire your love. There may be a strong, sexual attraction between you. You enjoy doing things together, and you stimulate each other to be creative.

Bill’s Mars in Your Fourth House

Bill pushes you to get out and do things when what you really feel like doing is relaxing at home. If you lived together, you might find his influence disruptive to your peace of mind.

Bill’s Jupiter in Your Fifth House

The time you spend with Bill is harmonious and pleasurable. You enjoy participating in creative activities and pasttimes together. In fact, you may enjoy it so much that it’s difficult to get back to business.

Bill’s Saturn in Your Second House

Bill encourages you to be frugal and prudent in your financial affairs. This may result in greater stability and security for you, or you may find him overly restrictive and stingy.

Bill’s Uranus in Your Twelfth House

It’s hard to keep a lid on old problems and hang-ups around Bill. He stirs them up in you, and forces you to face them. Although this may ultimately be good for you, it’s unsettling.

Bill’s Neptune in Your Fourth House

Bill finds your home intriguing and peaceful, and enjoys spending time with you there. If you lived together, your home life would be quiet and intimate, but he could introduce a certain degree of confusion by being disorganized or withdrawn.

Bill’s Pluto in Your Third House

Bill challenges you to think things through more deeply and express yourself more forcefully. You and he may have some intense debates, with your opinions and communication style undergoing a transformation as a result. You may find him domineering in expressing opinions.

Communication problems can make discussions between you unproductive. Bill may regard you as too ego-involved with regard to ideas, and you may find his communication style to be patronizing or insulting. Your relationship may suffer from frequent misunderstandings.

Bill impedes your efforts to achieve basic goals. He may feel jealous or envious of you and deliberately block your way, or he may regard you as egocentric or conceited, or he may lack respect for you or your basic goals. Bill can seriously dampen your self-confidence, and you often feel squelched by him.

There is a strong sense of mutual respect and responsibility between you. Bill’s reliability gives you a feeling of security, and your sensitivity, responsiveness, and nurturing ease his fears and insecurities. Your loyalty to each other gives you the ability to survive hard times together.

Your manner of expressing affection evokes Bill’s deepest longings, which may cause him to try to control or own you. While his intensity is compelling to you, you also may feel oppressed by it. There may be an especially intense sexual attraction between you.

You energize each other, and there is likely to be a strong sexual attraction between you. The combination of Bill’s willpower and your enthusiasm enable you to accomplish a great deal together. He can have a transforming effect on your style of action, influencing you to be more subtle and less impulsive. Attempts by either of you to direct or coerce the other’s behavior will be met by intense resistance.

SECTION II: The Relationship from Bill’s Point of View

Hillary’s Sun in Your First House

Hillary’s Moon in Your Sixth House

Hillary is responsive and helpful to you in your work, and she may encourage you to pay more attention to your dietary habits and health. She is affected by your work habits and how well you take care of yourself.

Hillary’s Mercury in Your Second House

Hillary can offer you good advice on how to handle your finances and personal assets. You should be careful not to represent her ideas as your own. You may provide her with financial support for the implementation of her plans.

Hillary’s Venus in Your Second House

Your material or financial circumstances are likely to improve through your relationship with Hillary . She eases your way as an expression of her affection. You enjoy giving each other gifts of personal significance or beauty.

Hillary’s Mars in Your Eleventh House

Hillary doesn’t get along well with your friends. They find her too aggressive or disruptive. She may not share some of your interests, or she may pressure you to be more goal-directed in pursuing them.

Hillary’s Jupiter in Your Second House

Hillary encourages you to use your personal and financial resources in ways you might not on your own. Though you may spend more money than usual, you often benefit in the end. She is very generous with you.

Hillary’s Saturn in Your Eleventh House

Your time with Hillary is usually spent alone, rather than in the company of others. Your friends may find her disapproving or austere. Your shared interests tend to be of a serious nature.

Hillary’s Uranus in Your Ninth House

Your experiences with Hillary cause you to rethink many of your long-held values and beliefs. The way you view the world may change as a result of your relationship with her.

Hillary’s Neptune in Your First House

The way you approach the world and express yourself is subtly affected by the way Hillary romanticizes you. She finds your style and appearance compelling and mysterious. You don’t know quite how to react to this, and may behave more tentatively in her presence.

Hillary’s Pluto in Your Eleventh House

Communication problems can make discussions between you unproductive. Hillary may regard you as too ego-involved with regard to ideas, and you may find her communication style to be patronizing or insulting. Your relationship may suffer from frequent misunderstandings.

While you may enjoy being together, you have a tendency to encourage over-confidence, extravagance, and irresponsibility in each other. You sometimes may feel taken for granted by Hillary , or find her over-blown and preachy. She sometimes may find you self-centered and lacking in perspective.

Hillary imposes restrictions and responsibilities on you which may dampen your self-confidence and impede your efforts to achieve basic goals. She wants you to be more patient, disciplined, and cautious. Your relationship has a serious tone.

Hillary’s originality helps you to be more creative and successful, and you encourage her uniqueness and individuality. You inspire and energize each other without competition. You’re drawn to each other, and may have felt an immediate attraction.

You regard Hillary as too analytical and insensitive to your feelings, and she finds you overly emotional and difficult to talk things over with rationally. There may be frequent misunderstandings and hurt feelings between you.

If there is a romantic attraction between you, it may be troubled or one-sided. Hillary can be unsympathetic towards your feelings, causing you to feel dismissed and unloved. She may regard you as excessively emotional or clingy, and you may see her as shallow.

Hillary’s lack of sympathy towards your feelings and dependency needs damages your self-image, and can make you feel depressed. She experiences your emotionalism as a weakness that threatens her security. Her pursuit of business goals or other responsibilities can make you feel neglected and insecure. You often feel harshly judged and coldly treated, and you make her feel guilty.

You have an intuitive understanding of each other, and can communicate without speaking. You’re able to put Hillary’s fantasies and dreams into words, and she inspires your imagination and creativity.

Your grace and social skills encourage Hillary to express her impulses and desires in a gentler manner, and really attract her to you. Her energy and enthusiasm encourage you to be more outgoing, and inspire your affection. There is a strong sexual attraction between you.

Hillary’s gentleness evokes a spiritual love in you, and your affection and caring draw her out. You are extremely sensitive and tuned in to each other, and your relationship has an almost mystical quality. You give to one another with tenderness and compassion, and without thought of yourselves. Your relationship is highly romantic and idealistic.

Your relationship has a special intensity, and you’re powerfully attracted and drawn to each other. Your affection evokes Hillary’s deepest longings, and the power of her personality is compelling to you. Your relationship is uniquely satisfying for her, and may have a transforming effect on the way you relate to others.

Hillary has no Major Aspects to your Mars

Hillary finds it difficult to understand your motivations and impulses, and you find her indifferent to your actions and desires. A sexual relationship between you would be difficult.