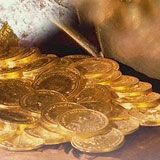 The Gold Forecast Report can be used by financial astrologers, financial consultants and researchers who are interested in pursuing astrological variables as a possible additional factor, and astrological researchers of any area who wish to get a better appreciation for an AstroSignature that has been developed with the help of actual empirical research, rather than only assumptions and anecdotal evidence.

Sirius has the ability to produce a graph of predicted behavior, actual behavior, the correlation between the predicted and actual behavior, and whether the correlation is statistically significant. The behavior must be quantifiable and preferably scored at reasonably regular intervals. Price data is a good example of this behavior. Another example would be athletic performance, such as batting average or on-base average of a baseball player for each game played. Sirius also provides extensive research tools to discover an AstroSignature that has statistical significance. The Gold Forecast AstroSignature was developed using these tools.

Shown below is a graph of gold prices predicted by the Gold Forecast AstroSignature and the actual prices. This is a graph produced in Sirius, and this is an example of the graph that you can produce for future time periods if you obtain from a financial data service recent gold prices.

As you can see from the legend shown below the graph, the dark green line is the forecasted prices and the light green line is the actual scores adjusted to fit within the range of predicted socres so that the graphs can be easily compared.

In Sirius there are additional windows that can be accessed while viewing this graph: there is a window for viewing the daily scores and the astrological influences in effect for each day, so that you can see the specific details that contribute to the resulting graph. This window of details is very helpful for analyzing and understanding the astrological influences that are in effect at any given time. Also displayed is the correlation value between the predicted and actual scores. For the above graph the correlation is .08 (positive 8 percent). Although an 8 percent correlation may not seem very high, visually you can see that there are some general similarities between the predicted and actual graphs.

If you purchase the Gold Forecast Report, you can select the “Customize/View AstroSignature” button to view the details of the AstroSignature. You can do this for both the high risk/high yield and for the low rish/low yield AstroSignatures.

Shown below are the correlations obtained (in percent values rather than decimal values) for the “Higher Yield, Higher Risk” AstroSignature provided with the Gold Forecast Report option of Sirius for the years that the gold prices are available:

Most importantly, a calculation of the average correlation using the Fixed Effects Model in the Zumastat 4.0 statistics software (www.zumastat.com) produced the following results:
Average Correlation = 9.2 % and p value = .00000. The results are statisically significant with less than a .00001 significance level !!!!!

Are the results spurious?

Statisticians and experienced researchers know that finding a formula that matches existing data is not necessarily difficult. The formula could be spurious. In other words, it might be a formula that happens to match previous data, but only because of random fluctuations and not because of an actual ability to forecast the behavior.

Several precautions were taken to help prevent identifying an arbitrary formula that happens to provide a high correlation:

1. Astrological theory was applied consistently rather than arbitrarily. For example, for harmonic aspects, all aspects in the harmonic are used and all are used with equal weighting. When a 7th harmonic aspect is used, for example, the 1/7, 2/7, and 3/7 aspects are incorporated into the formula and all 3 aspects are given the same weight. It may be possible that different aspects are more important, but there is currently no theoretical basis to support this idea so it was not implemented in the formula.

2. The formula is consistent with astrological theory and previous findings. For example, the findings from the study of the Gauquelin data indicated that particular harmonic aspects would be important, and this concept was applied in the gold forecast. Click here (http://www.astrosoftware.com/discovery.htm) to read the study of the Gauquelin data. A pilot study using similar astrological principles also obtained positive results and you can click here (http://www.astrosoftware.com/Proveast.htm) to read this article.

Given these restrictions applied in the research, the gold forecast formula and the pursuit of AstroSignatures for forecasting commodity prices deserves additional research, and may prove to have a viable and sound scientific basis despite the current skepticism in the scientific community that planetary positions can have any relationship to terrestrial behavior other than via gravity or other mechanisms already identified and understood. The Gold Forecast is a sincere and impressive step in developing objective validation of astrology and applying astrology in a realistic and reliable way to financial forecasting. The Gold Forecast, however, has not been validated and replicated by additional research and therefore, from a scientific point of view, must still be considered speculative. Note that the reason why research is conducted is to understand something that was previously not understood. The Gold Forecast, and the research cited above which is based on similar principles, represents a step towards greater understanding.